Police abusing the other emergency services to facilitate the fracking industry – disgraceful waste of taxpayers money and putting other people at risk by tying up an essential piece of emergency equipment.

The Fire Brigades Union has accused North Yorkshire Police of making a “nuisance call” when it requested fire service help at an anti-fracking protest at Kirby Misperton.

A fire engine with hydraulic platform was requested on Monday (2 October 2017) to extract a protester from a small wooden tower on the verge outside the gate to Third Energy’s gas site at Kirby Misperton. A specialist police team used the equipment to bring the protester down. DrillOrDrop report

“I think the police should not have used us in that manner. I think it was a misuse of fire service resources. It was a false alarm.

“We are often talking about nuisance calls. This was a nuisance call on the behalf of the police. We should not have been there.”

Read the full article in Drill or Drop here:

As horizontal drilling starts in Lancashire this month, the Guardian talks to protesters and staff at the Cuadrilla well.

Mike Hill, sitting in his living room a few miles from a fracking site outside Blackpool, is brandishing a government letter brushing aside his concerns about the industry. “You, Theresa May, overruled democracy to force fracking on the residents of Fylde,” he says, referring to his own letter to the prime minister, in which he urges her to heed experts’ calls for tighter shale gas regulations.

“And then you won’t pay attention, the slightest attention, to anybody in regards fracking regulation, fracking monitoring, public health risks, risks to indigenous industries,” says the chartered engineer, who used to work in the oil and gas sector.

“I’m not really a protester – I’m an engineer,” adds Hill, who won 12% of the vote in the 2015 general election running as an independent candidate in Fylde to raise awareness of fracking locally.

You can read the full Guardian Article here:

Mr Morrison made front page news in Blackpool last week when he was told he would be arrested unless he promised to stop sounding his horn on his daily journeys past the fracking protests. He refused and made a formal complaint. Blackpool Gazette

A Lancashire businessman who had been threatened with arrest for sounding his car horn in support of anti-fracking protesters led a convoy of hooting motorists past Cuadrilla’s shale gas site this morning.

Twenty-eight other cars followed Brian Morrison, honking their horns continuously as they drove past the site at Little Plumpton near Blackpool.

None of the drivers were arrested, although but Mr Morrison said police followed him home and warned him not to organise another convoy.

But he vowed to make the protest a regular event and said he expected more drivers would take part next time.

Read the full article with images from the Blackpool Gazette, here;

Landowners accuse government of “major failing” over liability for fracking

Landowners are demanding speedy action from the government about who should deal with the consequences if something goes wrong with fracking.

The Country Land & Business Association (CLA), which represents farmers, landowners and rural businesses, says the government has not made sufficient progress to tackle the risks of long-term liability.

In a letter to the Energy Minister, Richard Harrington, the CLA wants the government to give urgent reassurances over the risks of long-term costs to private landowners.

“Our members take a long-term view of land management and will continue to run businesses using land with shale gas developments on them long after an operator has left a site.

“It is critical that the right protections are in place to ensure the long-term integrity of well sites and remove any risk to future use of affected land.

“It is greatly concerning that despite the acknowledged risk, the Government continues to encourage the industry to increase the number of sites in development without an adequate solution to liabilities being in place.

“For a government whose stated objective is to establish a world leading shale gas industry in the UK, the lack of clarity on these important issues is a major failing.”

The CLA said it had consistently raised the concerns of liability for fracking operations with ministers, officials and the industry over the past four years.

The organisation said all had acknowledged the liability issue needed addressing. But it added:

“To date, no solution has been provided to private landowners despite the continued growth of the UK shale gas industry.”

The CLA says there is:

“So far, the government and the oil and gas industry have failed to reassure landowners and the general public that fracking is safe.

“Public opposition to this industry is growing daily as more and more communities are threatened with fracking. It is certainly not a foregone conclusion that fracking for shale gas will ever progress to full scale production. It is extremely costly to produce and has many environmental impacts.

“Farmers should certainly think twice before they sign up, as short-term gains may well be offset by long-term losses. Accidents can and do happen and who will pick up the bill?

Labour’s shadow chancellor John McDonnell paid a unpublicised visit to Lancashire’s anti-fracking camp. Mr McDonnell listened to concerns about fracking from protesters. They also told him of the negative impact they believed shale gas drilling would have on the local community.

Other concerns included worries over the high level of policing at the camp on Preston New Road. A spokesman for the Roseacre Awareness Group said: “He firstly visited the Community Hub and afterwards we all walked to the roadside so he could see the drilling for himself. “The media team showed him drone images of the site and other footage. “He also came to our Welcome tent where we gave him a Frack Free Lancashire T-shirt, badge, car sticker and wrist band.

The High Court has told the UK government to change some new rules for environmental court cases to protect those taking legal action.

Three organisations, which challenged the Ministry of Justice, said the rules had made it more difficult for individuals and campaign groups to challenge public bodies in court.

The rules, introduced in February 2017, scrapped automatic caps which limited the costs of losing a legal challenge in England and Wales. Instead claimants had to provide detailed information in open court about their personal finances and a judge could increase the limit on costs at any stage of a case.

Campaign organisations said this made it impossible for individuals and charities to know at the start of a case what they were liable for if they lost.

In a judgement today, Mr Justice Dove said the rules on cost caps would benefit from further clarification.

The oil company, Angus Energy, faced criticism this morning from county councillors in Surrey over its operations at the Brockham oil site near Dorking.

The company was accused at a meeting of the council’s planning committee of confused communication, betrayal of trust and misleading statements.

The comments centred on a sidetrack well drilled in January 2017.

At the time, Angus said it was carrying out maintenance work on the existing wells at Brockham. But it later said it had drilled a new sidetrack and that this, along with future production from it, was covered by an existing planning consent.

The council refutes this. In a recent letter to the Oil and Gas Authority, planners have confirmed that both drilling and production from the new well need new permissions (DrillOrDrop report).

UK is 55 million years too late for fracking to work, says expert

The geology of the UK is unsuitable for fracking and the opportunity of the new energy source has been “overhyped”, a geoscience expert has claimed.

Professor John Underhill, chief scientist at Heriot-Watt University in Edinburgh, suggested the UK is “55 million years too late” for the gas extraction technique to work.

He said reservoirs of shale gas had been damaged by seismic activity 55 million years ago, causing some of the deposits to escape.

By Ruth Hayhurst Drill or Drop on September 8, 2017 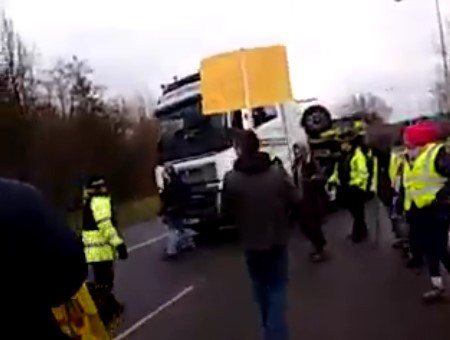 A photojournalist who reports on anti-fracking protests had his conviction for obstructing the highway overturned on appeal today.

Peter Yankowski Walker, who has been covering the protests for about four years, was acquitted at Bolton Crown Court by a judge and two magistrates.

After the hearing, Mr Walker, who lives in Oldham, said:

“I truly believe that we need to be able to witness history as it happens.

“It is very important that people capture what is happening in an unbiased way close up.

“The story is not being told in the mainstream media so it has to be told by independent journalists and through social media.”

Mr Walker had been found guilty in May 2017 by a district judge at Manchester Magistrates Court. (DrillOrDrop report)

The prosecution case was that he tried to slow down a lorry at the end of an anti-fracking protest near a depot in Bolton in February. The depot had been the focus of multiple protests because it belonged to A E Yates, the main construction contractor at Cuadrilla’s shale gas site at Preston New Road near Blackpool.

Mr Walker said he had been at the protest for about five minutes and he was in front of the lorry for about three seconds.

But the Manchester court  imposed a conditional discharge for 12 months and ordered Mr Walker to pay £150 costs and £20 victim surcharge.

“I have never been arrested before this.

“I did not intend to stop the wagon or obstruct the highway. I intended to keep myself safe.

“It would have been really stupid to jump in front of a wagon.  Why would I risk getting a mark against me?

“The judge and the magistrates said today this was a credible explanation.”

“I have been threatened with arrest by the police since then.

“The police and security at Preston New Road knew my name.

“I had got on the police radar as someone of interest to keep an eye. It did affect me in a small way.”

Reacting to his acquittal, he said:

“I have got a clean record again. I am of good character. It feels really good.”

Read the article in Drill or Drop here:

Damning Fracking Report Delivered to the Archbishop Of Canterbury

The Grim Reaper and Dame Vivienne Westwood visited the London home of the Archbishop of Canterbury to deliver a damning report commissioned by Talk Fracking, called ‘Whitehall’s Fracking Science Failure’. Our report proves that the MacKay-Stone report is riddled with false and out of date input data. The input data used in this report is clearly inconsistent with published, publicly available data. The inconsistencies should have been highlighted to Ministers by government advisors immediately upon publication.

The Conservatives and The Church of England for some time have been singing off the same hymn sheet citing the Tory commissioned MacKay-Stone report as their reason to frack England. Dame Vivienne Westwood met with representatives of the Archbishop of Canterbury urging him, “Do not allow the Church of England to be suckered into the Tories grizzly agenda to Frack our Green and Pleasant Land, which is about to be turned into a toxic pin cushion”.

Our report exposes the MacKay-Stone report as a dodgy dossier, and England must at the very least follow Scotland and Wales with an immediate moratorium on fracking. Given this evidence, any other position would be highly irresponsible.

Environmental Impact Figures Are Up To 400 Times Worse Than Reported: