In March last year Cuadrilla made a new application for their Becconsall site. Although they have backed away from a full scale frack at Banks they now want to perforate the well with high explosives and install pressure monitoring equipment. They have refused to give details of the explosives to be used but will need to bring a full work-over rig on-site with pumps to recirculate fluid in the well (an almost identical application for a site at Grange Road in Singleton was refused in February this year). Ribble Estuary Against Fracking (REAF) issued this statement.

It has also come to light that Pink Footed Geese feeding on a wildfowl refuge set up by Cuadrilla were shot by hunters who had leased the same fields.

Lancashire County Council’s planning committee approved the Banks application in September last year but did not issue the planning permission until the 1st May 2015! The committee’s recommendation to approve was subject to the applicant putting in place “off site ecological mitigation measures” to be provided throughout the wintering wildfowl seasons. However, the owners of a large section of land set aside for migratory birds had an ongoing contract with the gun club. See the full time-line for the Banks Site.

This is just one of numerous breaches of planning that Cuadrilla have committed. Read more… 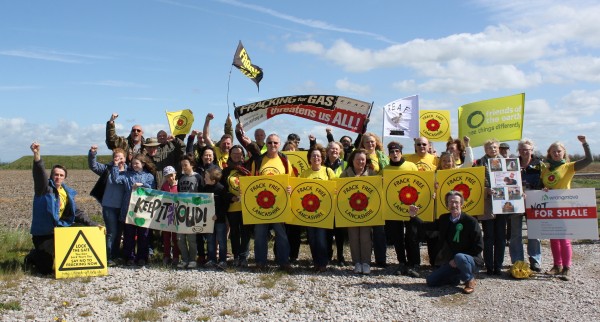 Residents from across Lancashire gathered at the site on Bank Holiday Monday (4th May 2015) to show their opposition to any activity by Cuadrilla. In addition to the new applications for exploratory fracking at Preston New Road and Roseacre Cuadrilla are seeking to retain and extract saleable data from as many sites across Lancashire as possible. As 60% of the UK is now available to fracking companies it is essential that every community facing this threat gets informed and organised to resist.

Read the full story on Frack Off & Drill Or Drops websites…