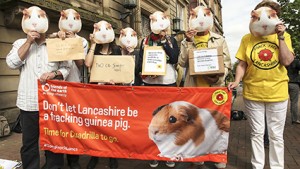 The call comes as Lancashire County Council prepares to decide tomorrow (Monday 29 June) whether or not to grant Cuadrilla permission to drill and frack four wells at Preston New Road near the village of Little Plumpton in the Fylde. [1]

The MPs and MEPs signed a joint statement expressing serious concerns about the risks that fracking poses to people’s health and the environment and calling for any fracking applications to be withdrawn or refused planning permission. [2]

They join a growing number of people and organisations calling on councillors in Lancashire to reject the applications, including:

Jasber Singh from Central Lancashire Friends of the Earth said:

“We’re delighted that MPs and MEPs from across the North West have joined the growing call to put fracking on hold.

“Fracking isn’t just a threat to people’s health and the local environment, it also undermines action on climate change.

“Over 11,000 Lancashire residents have objected to the plans to frack at Preston New Road. We urge councillors to stand up to pressure from officers and Cuadrilla, and protect residents and the environment by rejecting these unnecessary and unwanted fracking plans.”

The Development Control Committee meets on Monday 29 June to decide on the plans for Preston New Road. The Frack Free Lancashire alliance of local community groups opposing fracking is urging residents to join a rally outside County Hall, Preston, from 9am.

NOTES TO THE EDITOR

2. The 17 North West MPs who have signed the joint statement on fracking are:

4. Medact: Health professionals call for an immediate moratorium on fracking due to serious risks to public health:  http://www.medact.org/news/new-report-health-fracking-the-impacts-opportunity-costs/

5. CHEM Trust: Chemicals from fracking could cause significant pollution and damage to wildlife:
http://www.chemtrust.org.uk/chemicals-from-fracking-could-cause-significant-pollution-and-damage-to-wildlife/

6. Friends of the Earth: Over 300 Lancashire businesses say no to fracking: